The First Steps in Restoring the 1926 Alexandra Bridge: A B.C. Transportation Icon

Standing on the 1926 Alexandra Bridge above the Fraser River, is like standing atop an iceberg of history. The bridge, situated at a narrowing of the river near the Nlaka’pamux village site of Kequeloose on the traditional lands of the Spuzzum First Nation (SFN), has been a natural west-to-east crossing point for millennia. Indigenous peoples plied their canoes across the Fraser, linking the coast to the interior of what we know today as the province of British Columbia, in an intricate series of trade routes. Upon their arrival, fur traders used this crossing, as did tens of thousands of fortune seekers who flocked to the area in 1858 during the Fraser River Gold Rush.

In 1863, the government of the newly-established colony of British Columbia, decided to build a waggon road to Barkerville’s gold fields in the Cariboo. Part of this transportation route included constructing a bridge across the Kequeloose narrows. Named after the then-princess of Wales, later Queen Alexandra, the bridge operated until it was severely damaged by floods in 1894. 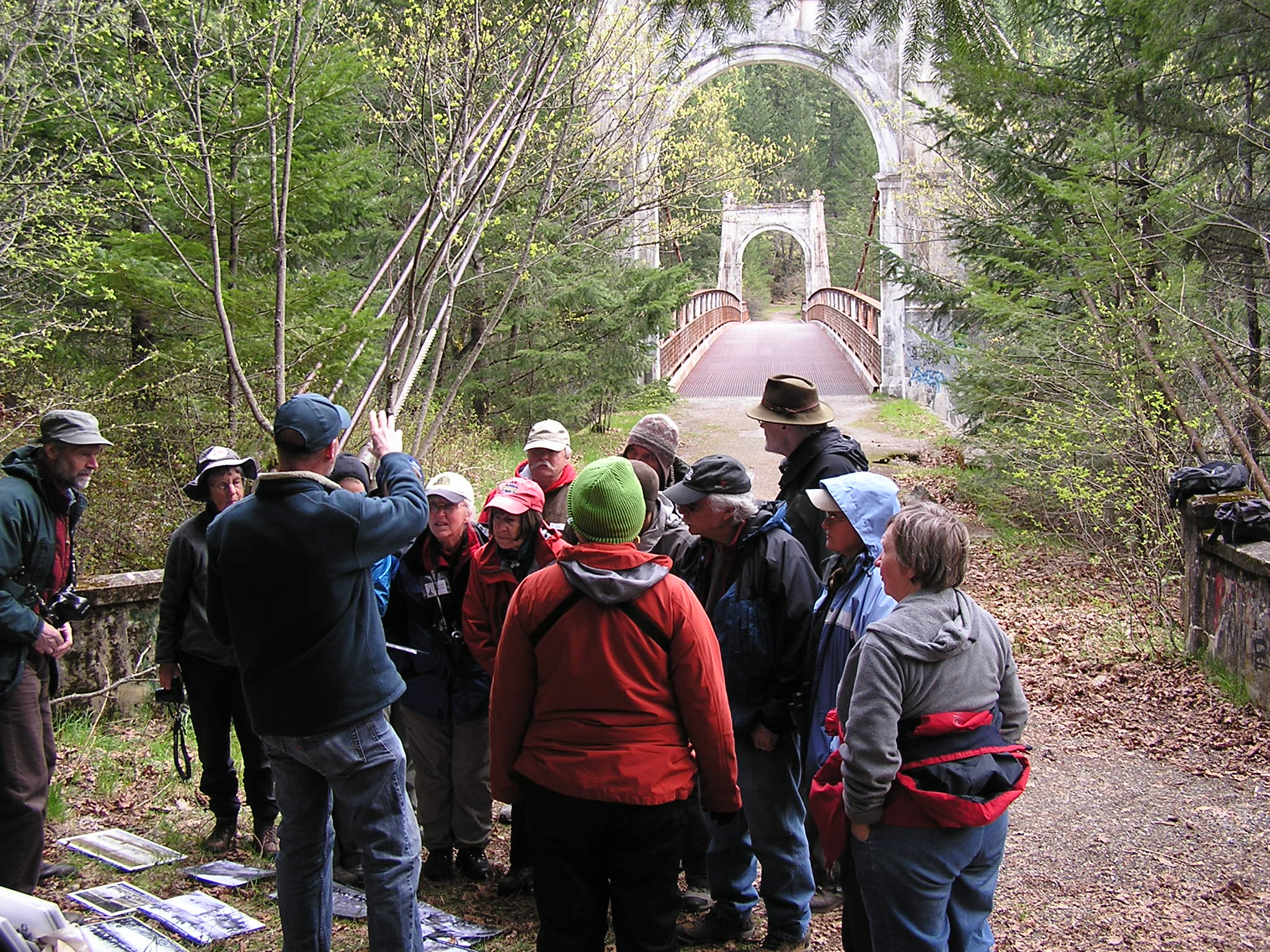 A group of outdoor enthusiasts and heritage buffs learns more about the history of the iconic 1926 Alexandra Bridge during a pre-COVID-19 tour. Photo credit: The Hope Mountain Centre for Outdoor Learning.

The maintenance of the 1926 Alexandra Bridge remains the responsibility of the Ministry of Transportation and Infrastructure (MOTI). In 2009, SFN recognized the potential of restoring the bridge to create a world-class heritage tourism attraction that could act as a catalyst for economic development in their territory. They partnered with the New Pathways to Gold Society (NPTGS), a non-profit organization dedicated to heritage tourism development and Indigenous reconciliation, to restore the bridge structure and precinct.

The SFN and NPTGS assembled a coalition of partners to find the resources to restore this piece of B.C.’s transportation history. Partners include BC Parks, MOTI, Canadian National Railway, BC Heritage Branch, Heritageworks Ltd., and the Fraser Valley Regional District. Together the project partners developed a site concept and economic development strategy, both of which were informed by extensive community and stakeholder consultation.

“We have a long-term commitment to restoring not just the bridge, but the surrounding provincial park and precinct, which have so many heritage tourism values,” said NPTGS Co-Chair Terry Raymond, “The precinct contains Indigenous, fur trade, gold rush, Chinese, railway, and other history – it’s like a layer cake. But the heart of it all is the bridge.”

In February 2021, SFN, NPTGS, and the project partners received $500,000 from the Government of B.C. via the Community Economic Resilience Infrastructure Program to fund initial rehabilitation work on the bridge. MOTI contributed another $400,000, bringing the initial phase budget to $900,000. 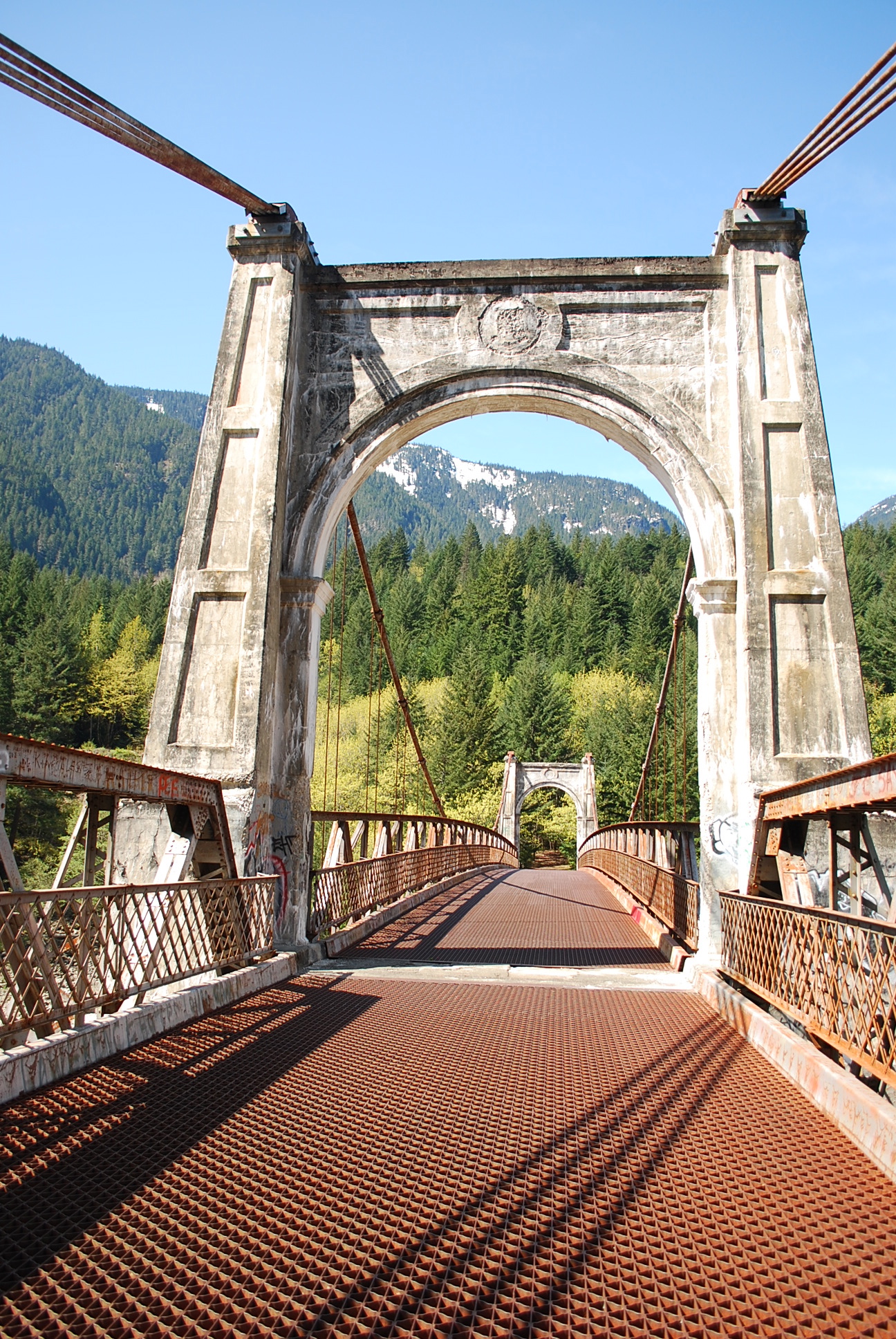 The graceful arches of the 1926 Alexandra Bridge’s support towers (2019) will be getting some TLC as rehabilitation work begins this summer. Photo credit: Heritageworks Ltd.

Group examines one of the 1926 Alexandra Bridge support towers in 2019, which will be receiving attention as rehabilitation work begins. Photo credit: New Pathways to Gold Society.

These funds enable the project partners to complete much-needed structural restoration. The focus of this first phase of work will be on repairing the upper sections of both support towers, including extensive concrete patching, restoration of moldings and relief panels to match historic details, and repair work on the bridge’s handrails. In addition, a memorial will be built, in collaboration with SFN, to acknowledge the thousands of years of Indigenous use of the Kequeloose crossing.

“The Alexandra Bridge is one of the most significant at-risk heritage structures in the province today,” says Gord Macdonald of Heritageworks Ltd., “We are delighted to be part of the team that will save it.”

Preliminary field work and testing of best solutions for repairs begins this summer. This initial work is the first phase of a long-term project which will take about five years and cost an estimated $3 to 5 million.

“The 1926 Alexandra Bridge is important not only because it’s a beautiful structure situated in a dramatic landscape, it’s standing atop 10,000 years of history,” said Richard Linzey, of the BC Heritage Branch, “Restoring the bridge and providing safe access to it will allow visitors a unique view of the Fraser River in the Canyon and help them connect to both the landscape and all the peoples who have moved through it during our shared history.” 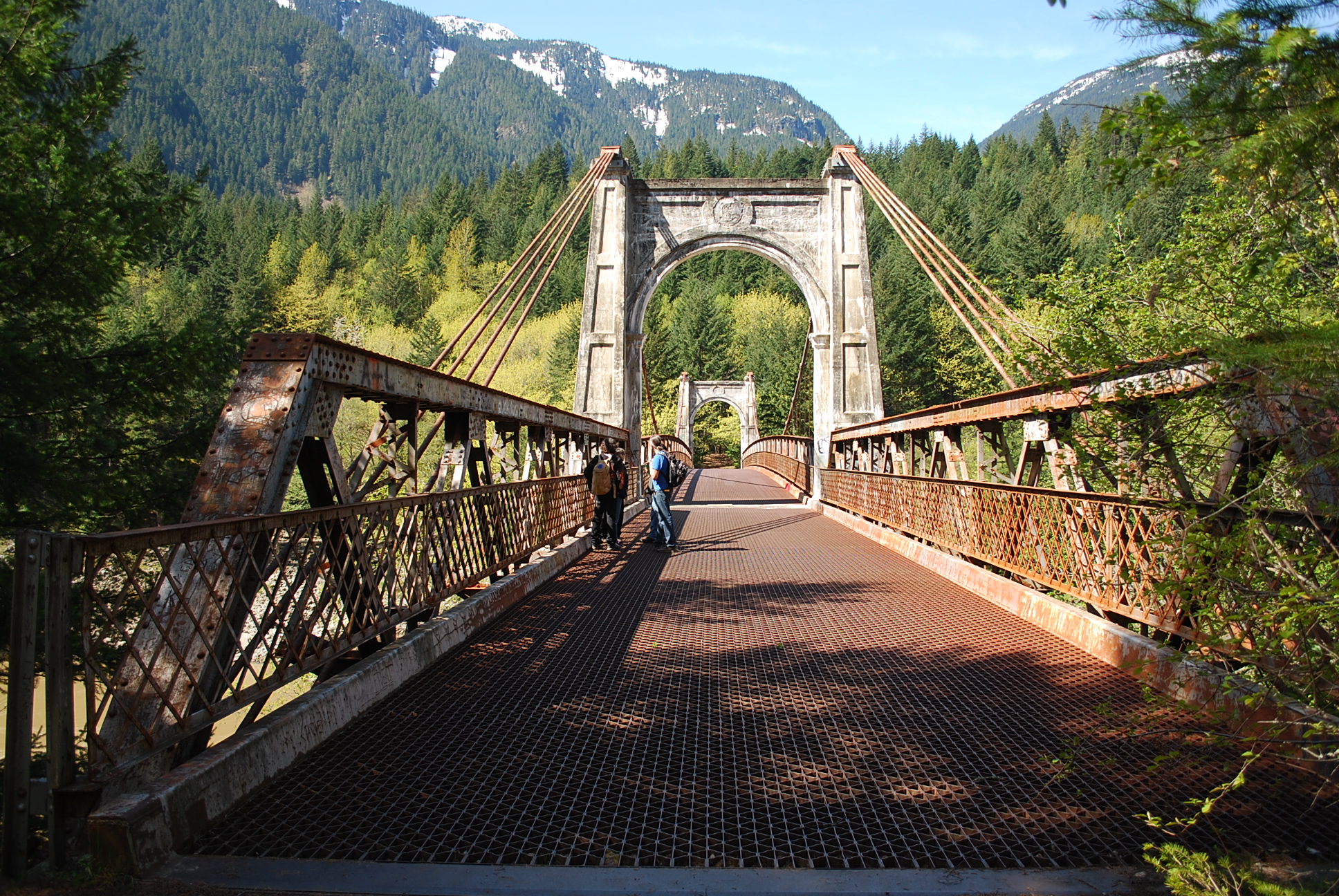 Visitors taking in the spectacular views of the Fraser Canyon on the 1926 Alexandra Bridge, situated in the traditional territory of the Spuzzum First Nation, 2019. Photo credit: Heritageworks Ltd.

SFN Chief and NPTGS Director James Hobart says the rehabilitation of the 1926 Alexandra Bridge is the key to unlocking the economic potential of the Lower Canyon for his people.

“We’re developing a campsite, a convention centre, new housing, and other amenities that we hope will make the Spuzzum First Nation the Canyon’s largest employer,” says Hobart, “I know there’s a lot of jokes about Spuzzum and how small we are, but in a few years, you won’t recognize it. It’s going to be a vibrant, happening place and the 1926 Alexandra Bridge is going to be at the centre of all of it.”