Hello from the tiny Mayne Island Museum! We are housed in the 1896 Plumper Pass Gaol building in “downtown” Mayne Island, on the unceded territory of Tsartlip First Nation (W̱JOȽEȽP), one of the five communities of the W̱SÁNEĆ Nation. The island is called SḴŦAḴ in SENĆOŦEN, the language of the W̱SÁNEĆ people who have been here and cared for the island for millennia.

The painful news in May 2021 about the remains of 215 Indigenous children found in unmarked graves at the Kamloops Indian Residential School, on the traditional, ancestral, and unceded territory of the Tk’emlúps te Secwépemc First Nation, brought home the reality of the genocide committed, and continuing, against Indigenous peoples in BC and across Canada. In response to this, the Mayne Island Museum, in partnership with members of the W̱SÁNEĆ Nation, began the process of revisiting and adapting the exhibits and programming, redoubling our efforts to decolonize the museum, build relationships, and become better allies.

My association with W̱SÁNEĆ elder John J’SINTEN Elliott, then known as STOLȻEȽ, began when I cold-called him in 2015 to ask about Mayne Island. Though I had met him earlier through my work as director of the Provincial Heritage Branch, in my retirement I was hoping Dr. Elliott might be willing to give me some insight into W̱SÁNEĆ history and culture as it related to Mayne Island. From that first coffee at Sassy’s Family Restaurant, where STOLȻEȽ generously shared his time and cultural and political knowledge, we have built a good working relationship and have gone on to do some good things on the island and, I hope, for the Tsartlip community and W̱SÁNEĆ Nation. In early 2021, the Mayne Island Museum worked again with J’SINTEN, his son PENAWEN, and daughter-in-law SX̱EDŦELISIYE on developing new content for the exhibit SX̱ENIEṈ ȻEĆÁ ĆSE LÁ,E TŦE NE ŚW̱ELO₭E TIÁ ṮEṮÁĆES in the First Peoples Gallery. They, along with Nick XEMŦOLTW̱ Claxton, chief of the Tsawout, provided input for another new display on surveying the islands, titled Whose Land Is This?, the title borrowed from the 2020 BC Studies article Whose Land Is It? Rethinking Sovereignty in British Columbia [i] by Claxton and John Price.

Inspired by my friends Fiona MacRaild and Dan Claxton from Tsawout, I also started writing a monthly article for the MayneLiner magazine to supplement the exhibits with a new outreach program. Beginning by asking the same question — “Whose land is this?” — these articles explained that the W̱SÁNEĆ understanding of the Saanich Douglas Treaty is that it was a peace treaty, not a land treaty. I wrote about how we on Mayne Island are all “treaty people” with the W̱SÁNEĆ, and that we are also “treaty people” with other First Nations that have signed treaties that include Indigenous rights on Mayne or SḴŦAḴ. These pieces have generated much conversation as well as some action by islanders and are part of our community’s process of “fumbling towards truth and reconciliation”. [ii] 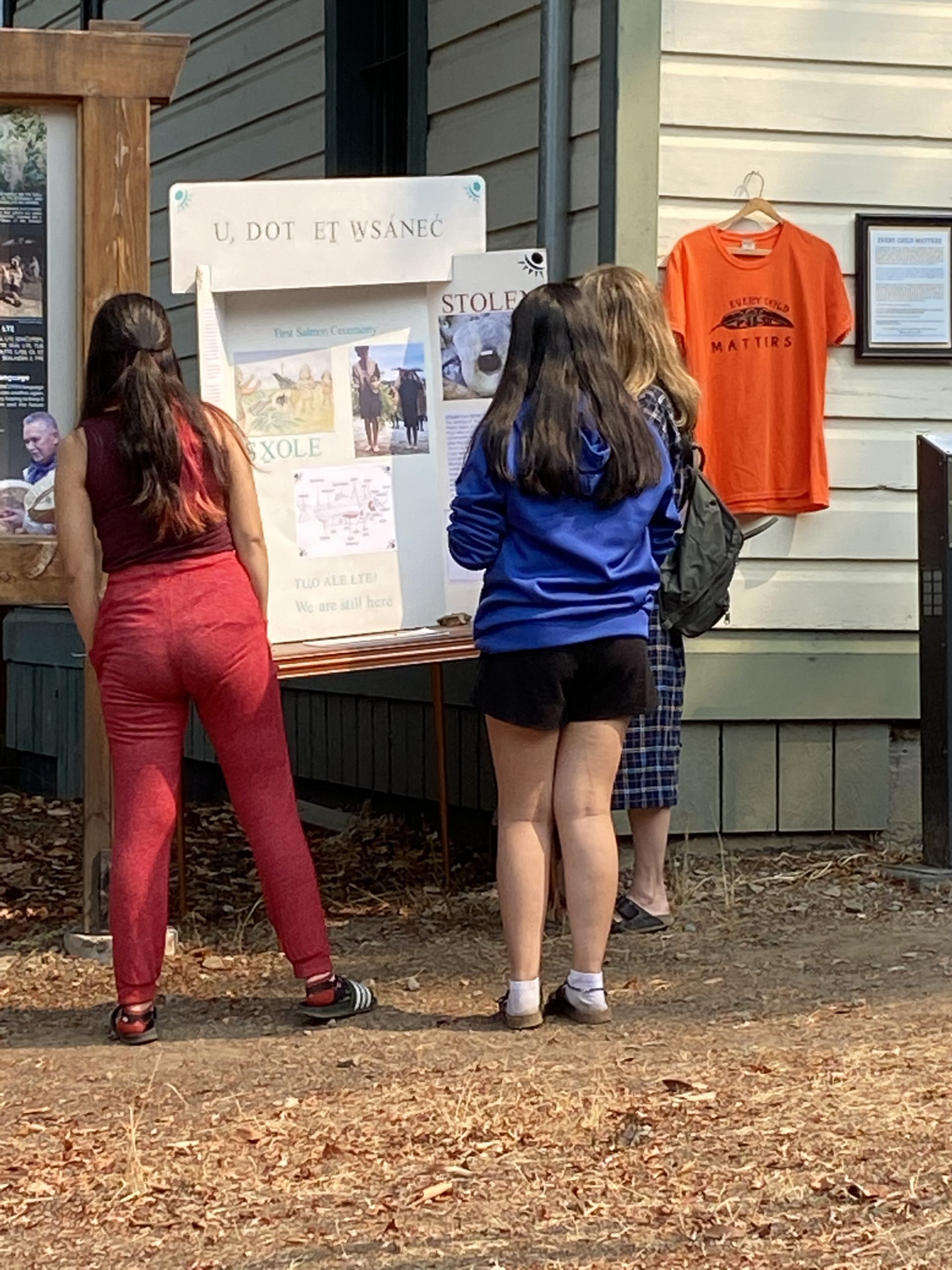 At the Mayne Island Museum with YCW student employee TOLISIYE Elliott (center) explaining her exhibit U, DOT ET W̱SÁNEĆ / We have always been W̱SÁNEĆ. 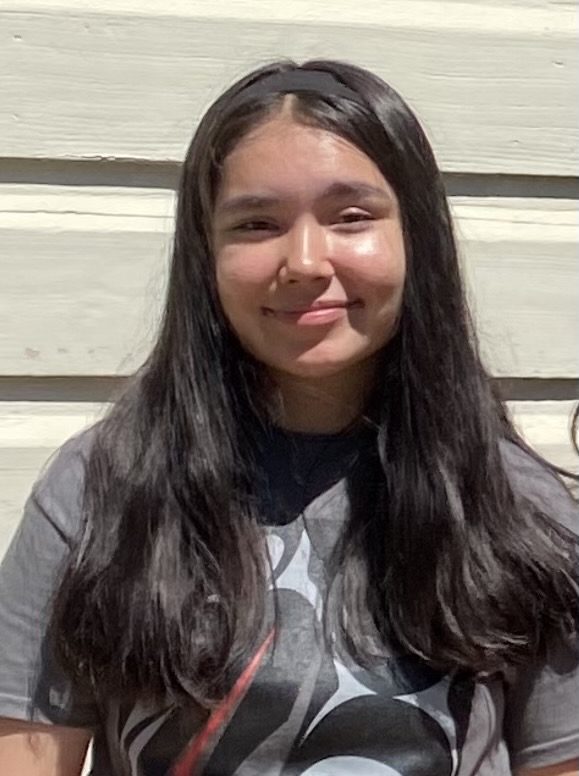 TOLISIYE Elliot from Tsartlip (W̱JOȽEȽP) village, one of the W̱SÁNEĆ First Nations. TOLISIYE worked at the Mayne Island Museum in summer 2021 on a Young Canada Works grant.

Then in the summer of 2021, the museum received funding for two Young Canada Works (YCW) positions, generating a huge boost in momentum for our tiny museum. We hired back our previous local summer student, Justine Apostolopoulos, who had helped us with digitization projects in 2020–2021, in addition to Grade 12 student TOLISIYE Elliot from Tsartlip village near Brentwood Bay, eldest daughter of PENAWEN and SENĆOŦEN language teacher Renee SX̱EDŦELISIYE Elliott, granddaughter of John J’SINTEN Elliott, and great-granddaughter of Dave Elliott — who had developed the original orthography for SENĆOŦEN.

TOLISIYE’s family were incredibly helpful in working with the museum to create a flexible schedule that allowed her to gain experience in the museum as well as spend time exploring and gaining cultural knowledge from her community. An unexpected benefit of hiring TOLISIYE was that her family were often in attendance with her at the museum on the weekends. In fact, by the end of the summer, she and her sisters, and sometimes even her mother, were involved in giving tours to visitors. Sundays became a day for islanders to stop by the museum to visit with TOLISIYE and her family, bringing gifts, sharing stories, learning SENĆOŦEN words and place names, and listening to W̱SÁNEĆ histories of the island SḴŦAḴ. As a result, relationships blossomed, and new initiatives were explored together.

In collaborating with TOLISIYE and her family, we learned that there were also unexpected benefits to working within restrictive health protocols. To reduce indoor visitor and staff contact, we moved our reception area outside the museum. This new outdoor “welcome space” became a node for visitor – staff engagement that frequently led to deep, meaningful conversations. As our student staff realized the extent of visitor interest in certain stories, they took the opportunity to curate temporary exhibits to help illustrate the stories they wanted to share. In the time spent doing cultural work, TOLISIYE herself researched and produced presentations, videos, and small physical exhibits on topics such as SḴŦAḴ place names, SXOLE or reef net fishing, SENĆOŦEN terms for the museum’s archaeological artifacts, the history of residential schools (with her own grandfather as a survivor), and taking care of our homelands. These resources will be added to the Mayne Island Museum website’s online exhibition links. 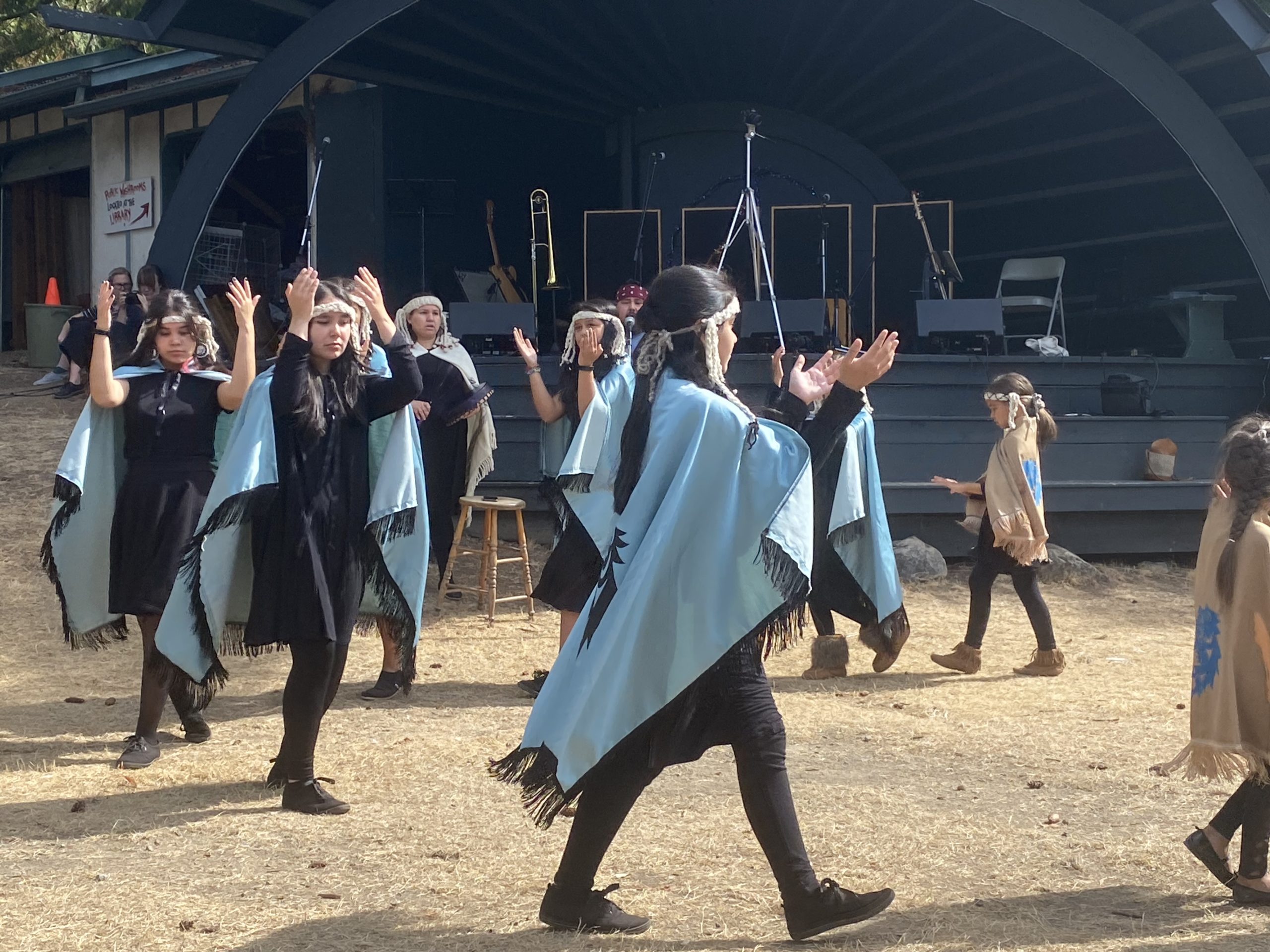 TOLISIYE Elliott and the HELISET Youth Drum and Dance Troupe from W̱SÁNEĆ perform at the final concert of the SḴŦAḴ Summer Festival of Music on Mayne Island, August 28, 2021.

To round out the summer of 2021, our other YCW student, Justine Apostolopoulos, organized our first community celebration since COVID-19: the 50/40/50 event at the opening of the exhibit Forty Years of Drama, A History of the Mayne Island Little Theatre, showcasing forty years of the Mayne Island Little Theatre company, fifty years of the museum, and fifty years of Lions Club on Mayne. With a moving welcome from Renee SX̱EDŦELISIYE Elliott, who spoke about how rewarding it had been for her family to spend the summer with TOLISIYE at the museum, to build relationships on SḴŦAḴ, and to have a visible presence on the island, the celebration started on a promising note.

And what a day it was! What a community celebration! What momentum our little museum has created over the past two years! I wonder, where will this momentum take us next?